Metalenz Looks To Reimagine the Camera in 2D

Proof-of-Work and Proof-of-Stake: the Main Differences 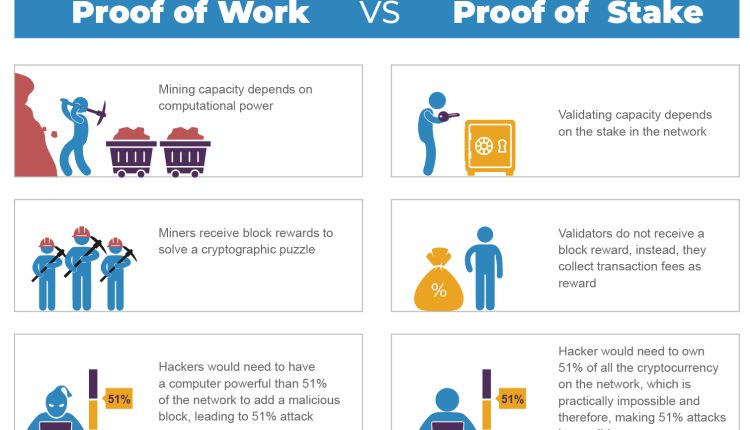 Proof-of-Work and Proof-of-Stake: the Main Differences

In the field of virtual money that ‘lives’ on the blockchain, proof of work (PoW) and proof of stake (PoS) are both the algorithms that help maintain blockchain in a secure environment. However, they have more than one function and are irreplaceable in adding new transactions.

As you already know, cryptocurrency is decentralized money and relies on computers to verify operations. This article will delve into the matter more, see how exactly these two mechanisms function, and discover their key differences.

How to Understand Proof of Work Algorithm?

This algorithm originally named the proof of work consensus algorithm, offers complex tasks for miners with powerful computers. As a rule, these equations are solved by a trial and error, and the one who completes them first gets the chance to add new blocks officially.

When miner authentication takes place, the virtual currency is then added to the blockchain. For this mechanism to work well, there needs to be a certain number of computers, which serve as energy resources. If only Bitcoin was around, it would be okay, but as the network of blockchains grows and the time for making transactions extends, it makes a problem, and transactions tend to grow slower and more costly, as in the case with Ethereum. The speed and cost depend on the business of networks.

Besides, they require so much energy and turn out not planet friendly. That is where the proof of stake mechanism comes in handy for blockchain and bridges some gaps made by the PoW algorithm.

What Is Proof of Stake Algorithm?

To validate blocks, miners need to stake their own coins. After the stake is put up and the block is confirmed, the miner receives back their crypto plus the fee. In case a validator confirms a fake transaction, the staked coins are taken as a fine, which creates a ‘motivation’ for miners to act fairly and be all eyes when verifying transactions.

All in all, this algorithm was designed to cover the gaps in the proof of work algorithm. It is more energy-saving, faster, and needs no extra expensive equipment. In addition, it is more secure as stakes are used as security deposits.

Let’s view it objectively and consider facts. Bitcoin, which uses only proof of work, consumes nearly as much electricity per year as a small country, and Bitcoin mining turns out very ‘heavy’ in this sense. Litecoin is another coin with PoW. Check out Litecoin price prediction 2030 to see if it’s worth buying in 2022.

Proof of stake solves this issue since it chooses validators in random order instead of seeking miners. Validatora adds transactions, so calculations become redundant, and there’s no need for that much energy.

Looking at the flaws of the Bitcoin blockchain, Ethereum started to transition from proof of work to proof of stake.

Does the Blockchain Remain Secure?

The trick is that the network of cryptocurrencies stays safe because there’s no existing power able to take over the system’s computing power.

Where to Purchase and Exchange Virtual Coins Fast?

Now, it might take a while for you to pick a worthy exchange service. But don’t be overwhelmed: with services such as LetsExchange.io, you can rely on the safe, non-custodial exchange to give you solutions right away. One see phrase lets you control everything, swap the necessary coins in a few clicks and at a good rate, and send them directly to a wallet. In its blog, see the latest advice on crypto and expert forecasts such as IOTA price prediction 2030 and more.