How to fix the Disk Is Protected USB Error 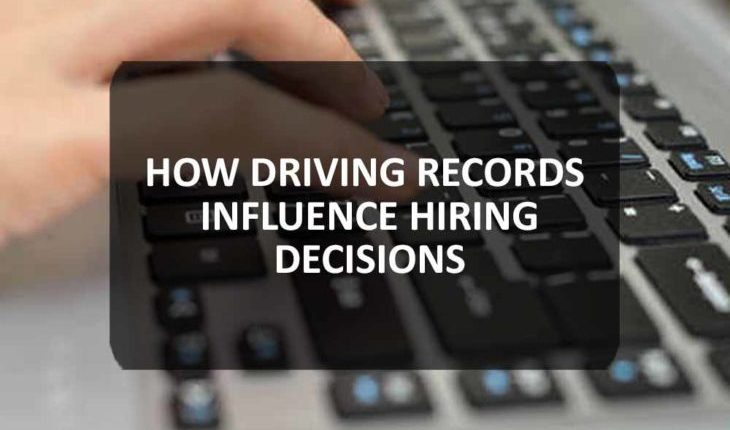 Driving records play an important role in hiring decisions. Even though marks on a driver’s record might result from misunderstandings or mistakes in the past, hiring managers should consider the applicant’s side of the story and make a responsible decision. Ultimately, it will be beneficial to the company if the candidate shows a clean driving record.

Drivers With A Clean Record

Most employers will request prospective employees’ driver’s licenses and driving records. This helps them determine whether the candidate can drive the company’s vehicle safely and legally. In addition, insurance companies check a driver’s record every year. If they find any violations, that will affect their eligibility to drive. The National Highway Traffic Safety Administration also points out that 95% of car accidents are caused by human error.

Hiring a driver is a complicated process. It is vital to get it right. Some applicants do very well in interviews, while others are better than they claim. That’s why employers should always require a pre-employment drug test and random driver testing after being hired. Drivers with a clean driving record are more likely to be hired by companies that require their employees to drive for the company. It is crucial to avoid hiring a driver with a history of major traffic violations, as these can lead to expensive fines or jail time.

People With A Good Driving Record

Driving records are an important part of a person’s life and can play a significant role in getting a job. Many employers implement the driving record background check to determine whether a person has any previous legal problems. They want to ensure that the applicant will be trustworthy in handling company property and goods. They are also interested in whether a driver has a clean record.

While not all companies take driving records into consideration, employers do in some jobs. If an applicant has multiple speeding tickets, this may be a red flag that a person is irresponsible and does not pay attention to details. This may be less of a concern if a driver has a clean record. Employers and insurers are looking for drivers who have no serious traffic violations. They do not want to hire drivers who have had numerous speeding tickets or a long history of minor violations. Employers and insurers do not want drivers with a string of speeding tickets.

People With A Suspended License

A suspended license can negatively impact your job application and, ultimately, your ability to get hired. There are several reasons why your license could be suspended, including past traffic violations, failure to pay child support, or even driving under the influence of drugs or alcohol. If you have a suspended license, it may take time to reinstate it, so it is essential to know how to get it back in good standing.

Employers rely on driving records for many jobs to determine whether a candidate is fit. A suspended license can make you less employable because it can prevent you from meeting potential employers and being considered for interviews. Employers view a suspended license as an indication of character, and they may assume you are irresponsible or haven’t learned from past mistakes. In addition to influencing hiring decisions, a suspended license can negatively impact your ability to drive a vehicle safely. In addition to reducing job opportunities, suspended licenses also increase the risk of recidivism and divert resources from legitimate public safety concerns. In light of these issues, a growing body of litigation has challenged license suspension policies.

People With A DUI Conviction

The hiring process can be difficult for people with DUI convictions because they will show up on background checks and in interviews. A DUI conviction can make it more challenging to get a job in certain professions, including those dealing with children or sensitive materials. It can also prevent people from getting into the military. Because of the high cost of hiring people with DUIs, employers tend to be cautious of these candidates. While they might seem highly qualified, companies often look at DUI convictions as indicating a problem with alcohol or drug abuse. This increases their costs because people with drinking problems are more likely to have accidents, lower performance standards, and miss more work than other employees. Additionally, the license suspension many of these people face makes it difficult to get a job and commute to work.

Subtitles and Captions: Why Add These to Your Videos?